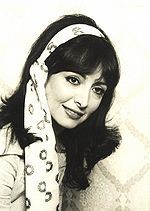 Hind Abilama also known as Hind Abi Lamaa is a famous Lebanese actress who was born in the year 1937.

Hend Abi lama3 died on the 15th of September 1987. The representative of the deceased Lebanese television named her the "Princess Abi Lama"

Hind began her work in the year 1962, by assisting the technical director Antoine Remy. In 1971 the director asked her to play a nurse in one of his movies for the desert journey with the representation of television.

Hind Abi lama got married to Antoine Remy, and they had her two sons.

In the year 1987 and due to sever illness, Hind Abi Allamma died, leaving sereval good works in both television and drama movies.

Help us improve this page:   Correct or update the Hind Abi Lamaa page