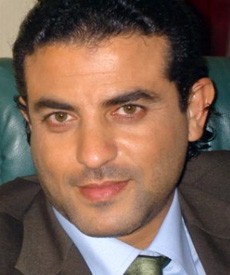 Hicham Bahloul, comedian and actor, is ex-champion wrestler from Morocco.

In 1992, he got his first chance as an actor in a play chosen for the first Festival Theatre School in Taza.

In 1993, he decided to enroll at the Faculty of Law in Casablanca. He graduated with a BA in 2000. Then began a career as an actor in amateur theatricals with the Association "Fawanis.

Hisham then started taking more professional roles in major international and national productions made for both television and film.

His first role on Television was in the TV movie Jeremiah in 1998, where he played the tole of 2nd Judith's Brother.
He also played a role in the TV movie Mary Magdalene in 2000.

His best role to date is in the movie Les coeurs brûlés - Burned Hearts in 2007, where he played the role of Amin.


Hisham Bahloul was enlisted in in the official Top 100 Sexiest Arab Men 2010 list.

Help us improve this page:   Correct or update the Hicham Bahloul page