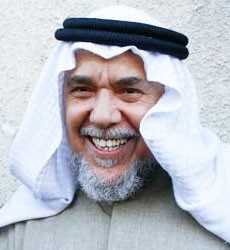 Hassan Mushaima is a political activist from Bahrain, and the leader of Haq Party.

Hassan Mushaima (Hasan Mushaima)is part of the Bahraini opposition, and was a leading figure in the 1994 uprising in Bahrain. He had also led calls to overthrow of the royal family.

Mushaima has been actively campaigning for more democratic rights in Bahrain, and before forming Haq, he was also a founding member of Al Wefaq.

Hassan Mushaima took part in the Bahrain Protests of 2011 in Pearl Square before being detained by officials on March 17,along with other opposition leaders like Ibrahim Sharif and Abdel Wahhab Hussein...or journalists like Lamees Dhaif.

Help us improve this page:   Correct or update the Hassan Mushaima page