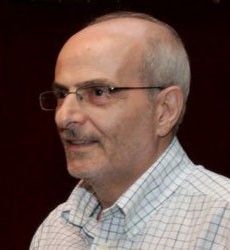 Dr Hassan Hamadeh is an eminent Lebanese writer and politologist.

Thinker and researcher in political affairs, Hassan Hamadeh (aka Hassan Hamadé or Hasan Hamadeh) is known for his controversial and lucid views.

Hassan is behind the creation of many concepts and technical words, such as Aarab or A'arab (as opposed to Arab) and Arab-Zionism (Sohyouniya al 3arabiya) referring to Arabs complying and working towards achieving the American-Israeli agenda in the region. He also stresses we should use the expression "Mashrek al Arabi" instead of the western created terms "Middle East" created only to divide the people in this part of the world.

"Americans mock and ridicule people of the world; they sell them their lies and at the end all those people, us included, find themselves guided by those lies."

"Democracy in Europe is history, as it is being gradually replaced with an Oligarchy without a public opinion, lead by industrialists."

"Half of the Lebanese media was with Lebanon and the other half was with the enemy during the July war 2006.
Sectarianism is stronger than the State, and we all live in our little cages, victims of our different sects"

"Barack Obama is nothing but a mere lifting of the ugly face of the American Administration."

Commenting on the Arab Revolutions, Hassan describes the Tunisia Protests and Egypt Protests are legitimate and authentic struggles, contrary to what some are calling conspiracy. But he warns the Libya Protests was hijacked and the opposition infiltrated by Israeli intelligence. The Syria Protests is however a completely different issue, totally unrelated to popular uprising. Luckily Syrians are very patriotic and will note the conspiracy.

Dr Hassan Hamadeh admits he was one of those who got duped by Rajab Tayeb Ardogan and Ahmed Dawood Oghlo. " They backstabbed and tricked us, clearly entering the American-Israeli game, and have lost their credibility and reputation just like Russia, and nothing they can do will restore it".

Help us improve this page:   Correct or update the Hassan Hamadeh page