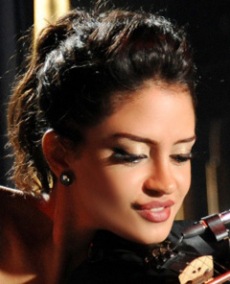 Hanine is one of the most versatile and charismatic violinists in Lebanon & the middle east, she's an energetic gifted performer, she plays occidental & oriental music with her live band.

She took her Diploma from the Superior National Conservatory of Music - Lebanon.

She started her first Solo performances at Le Particulier Beirut, and in the main time in Eau De Vie (Phoenicia hotel) and in Loge (Gemmayze), & Playroom.

We watched Hanine perform at the Blue Jeans Festival in May 2011, and were very much seduced by her stage presence and overall act.

Help us improve this page:   Correct or update the Hanine Al-Alam page