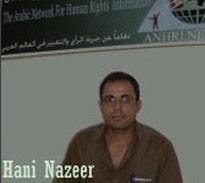 Hani Nazeer Aziz in an Egyptian blogger and internet activist.

Hani Nazeer Aziz is a Christian blogger based in Gena. He owns the blog Kariz Al Hub, which was removed from the Internet by Egyptian authorities following a crackdown of bloggers in October 2008.

Hani Nazeer was arrested and detained for more than 21 months, despite the support of the Arabic Network for Human Rights Information (ANHRI). The Egyptian courts had called for his release on numerous occasions, but the ministry continued to issue arrest warrants that keept Hani Nazeer Aziz in jail.

Help us improve this page:   Correct or update the Hani Nazeer Aziz page