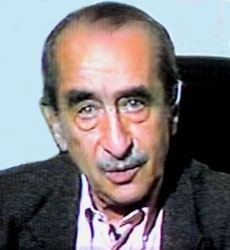 Hamdi Kandil is an Egyptian TV personality, journalist and activist.

After three years of studying medicine, he then decided to work in the press. He joined in 1951 the magazine Akhir Sa3a (last hour) at the request of the great journalist Mustafa Amin , and became an editor publishing readers' Letters.

Hamdi Kandil married three times, and his companion of more than 16 years is no other than famous actress Najlaa Fathi.

He presented numerous programs such as 'With Hamdi Qandeel' with Radio and Television el Arab, Kalam Rassas (pencil)on Dubai Channel and Lybian Satellite channel. He was also Editor on the Egyptian Satellite Channel and Dream TV.


Hamdi Kandil is a political activist and was part of many movements such as National Association for Change (NAC), that supported the candidature of Mohamed Elbaradei for presidential elections; a unit that regrouped numerous prominent activists such as George Ishak.

During the latest protests that began in January 25, 2011, Hamdi Kandil supported the Youth's demands and efforts to end Hosni Mubarak's corrupt regime.

Help us improve this page:   Correct or update the Hamdi Kandil page