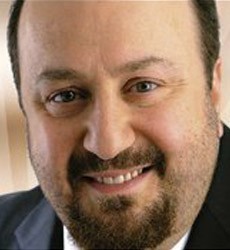 Ghassan Rahbani was born on May 13th 1964 in Antelias, Lebanon. He is the son of Elias Rahbani, younger brother of The legendary Rahbani Brothers Assi Rahbani and Mansour Rahbani, and Nephew of Fairouz.

Ghassan Rahbani is the pioneer of Hard Rock music in Lebanon & the Middle East. At the age of 15, he released his first English album in the genre. In 1981, he formed a heavy metal band called "Wild Haze" along with George Hayek (Guitars & Vocals), Fida Zalloom (bass), and Tony Samaha (Drums & Vocals). Although they worked on the very first Heavy Metal English album in the Middle East called "At Last The First", and performed together at a few gigs in Lebanon, the band split in 1984. This is when he created "The Gassan Rahbani Group" (GRG) which was christened in a 1985 gig at Naher el Kalb, followed by " The Casino du Liban rock concert" in 1986. The group members changed through the years, but Ghassan remained the lead naturally. The current guitarist, known for his chemistry with Ghassan, is the long haired Alain Makdessi. Other members include Richard Fawaz (Bass) and Sako Sagherian (Drums)...

In 2009, GRG shot a music video for an English soft rock track called Come Back To Me.

In 1997, Ghassan wrote & composed a musical called "Hannibal" showcasing more than 60 actors on stage (under the direction of Yacoob Shedrawi), including Ghassan Saleeba as Hannibal, Ranya Ghosen El Hajj as Imilsa, Joseph Boo Nassar as Scipio Africanus, and Pierre Dagher as Maharbaal. The play ran for a year in Lebanon, before inaugurating the 33rd Carthage summer festival & the Madina festival in Tunisia.

In 2000, he played Judas in the musical "And he rose on the third day" by Ossama Rahbani, written by Mansour Rahbani & directed by Marwan Rahbani.

As a producer, Ghassan Rahbani was also a pioneer; he was the first to form in 1997 an Arab all-girls group called The 4 Cats, with his wife Miss Lebanon Dalida Chammai. It launched the careers of many of its successive members including Nicole Saba, and Maya Diab.

In 2009, Ghassan came up with a new concept for a TV talent show called Ghani Ma3 Ghassan, which he originally hosted on Orange Television - OTV. In 2011, the show moved to Al Jadeed TV, with the primes presented by Charlotte Semaan.

After long years of activism through song, especially dealing with ecological problems in Lebanon (among other subjects), Ghassan decided to change from within as politicians seemed to turn a deaf ear.
In 2009, Ghassan was a candidate for the Lebanese parliamentary elections (Orthodox seat in Metn), on the Tayyar el Watani list (Michel Aoun), but did not make it. He was hoping to find a solution for the controversial problem of Quarries (more than 1,300 quarry sites nationwide - highest ratios of quarries per km2 of land, worldwide) that have completely disfigured the Lebanese mountains, by substituting quarrying licenses with import-export ones for the same people in a win-win situation.

Help us improve this page:   Correct or update the Ghassan Rahbani page