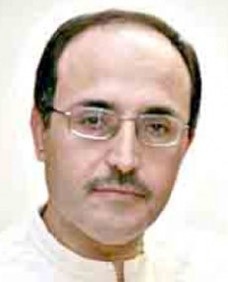 Ghassan Bin Jiddo is born to a Tunisian father and a christian Lebanese mother. His wife is a Muslim from south of Lebanon. He therefore holds the Lebanese nationality in addition to the Tunisian one.

He studied in Tunis, where he became a student activist early on. Like many Tunisians, he believed that the arrival of Zine El Abidine Ben Ali in power will bring progress and freedom to Tunisia. Like many, he was disappointed with the way things turned out, and was forced into exile after being arrested and placed for a while in home incarceration.

Prior to joining Al Jzeera in 1997, Ghassan Ben Jeddo worked for the BBC network, in the London newspaper Al-Hayat and in a number of other Arab newspapers as well as the Arab Institute for International Studies in Washington.

Ghassan Ben Jeddou is the only journalist to have interviewed, on July 21, 2006, the Secretary General of Hezbollah, Hassan Nasrallah, during the Israel-Lebanon conflict. That same year, Ghassan Ben Jeddo also interviewed Julia Boutros, Walid Jumblat and Fidel Castro.


In April 2011, Ghassan Ben Jeddou submitted in writing his resignation to Al Jazeera TV management due to a number of reasons the most important of which were the station's lack of professionalism and objectivity in covering the Arab Revolutions. While the station heavily covered the events like Libya Protests, Syria Protests and Yemen Protests, it barely mentioned what was happening in Bahrain for example despite the bloodshed there in the Bahrain Protests. When accused of being with the Syrian regime and against the people's demands, Ben Jiddo rejected such claims adding that after the assassination of the president Rafic Hariri, he was banned from entering Syria for more than a year and a half because of his moral stands.
He also reiterated that he strongly supports the reform protests in Syria, but on the other hand is and will always be with the pro Arab nationalism project represented by Syria.

In the year 2012, Ghassan became the Director of the Pan-Arab News satellite TV called Al Mayadeen Television, which was launch on the eleventh of June 2012 from the city of Beirut.

Help us improve this page:   Correct or update the Ghassan Bin Jiddo page