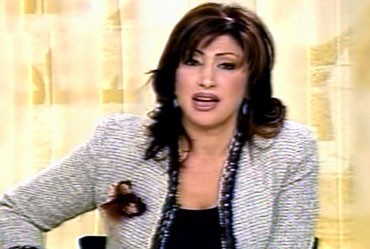 Ghada Eid holds a master degree in Media and Communications from the Lebanese University.

Ghada Eid is married to Salim Eid, they have daughter called Sandy Eid, who studied Media at the Lebanese University. Ghada and Salim also have a son called Mario.

Ghada Eid worked in the beginning in the press as an editor in Nidaa Al Watan Newspaper and the ICN Television which were both closed down by the government in the year 1997.

Ghada Eid later moved to work as an editor at Al-Massira Magazine. She also worked on the making of some political shows.

In the early 2001, Ghada Eid moved to New Television - New TV. She worked as a reporter for the news team. Until she finally got the chance to prepare and present a politial show of her own entitled Al Fassad. (The corruption)

Ghada Eid show which deals with hot topics of corruption in the Lebanese government, have put her life at risk. Ghada Eid is said to have received many life threats, not to mention the numerous lawsuits . Despite all the trouble, she keeps her voice heard and her program running to oppose corruption and the leaders who are putting Lebanon at risk.

Help us improve this page:   Correct or update the Ghada Eid page