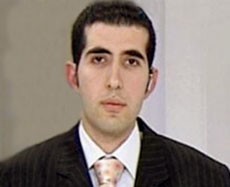 Firas Hatoum is a Journalist and a TV Reporter who works with New TV Lebanon. Firas and two of his friends who work at the station were charged and jailed for tampering with criminal evidence. Firas broke into the apartment of Mohammed Zuhair Siddiq, who is wanted in Lebanon for his connection to the assassination of Former Lebanese Prime Minister Rafik El Hariri.

It is a fact that Firas Hatoum illegally entered the apartment. The initial plan was only to take pictures of the building from outside, but Firas rash decision and journalistic enthusiasm pushed him into going into the appartment of Mohamed Zuhair Siddiq with hopes of finding any documents relevant to the Hariri Assasination Plan.

New TV has launched a special support campaign to help the release of Firas and his friends.

Help us improve this page:   Correct or update the Firas Hatoum page