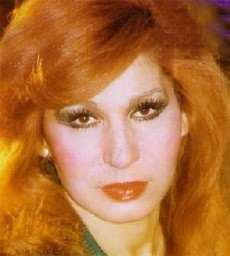 Fayza Ahmed also known as Faiza Ahmad is an Egyptian singer and actress. Fayza Ahmed is of Lebanese and Syrian origin.

Fayza Ahmad was born on the 5th of December 1934 in Saida, Lebanon. Her mother was Lebanese and her father was syrian.

Fayza Ahmed was a mother of five children and nine grandchildren.

Fayza Ahmed passed away on the 24th of September 1983 in Cairo after suffering from cancer.

Fayza Ahmed acted in the 1957 Egyptian movie entitled Tamr Henna, a movie which featured her along with Naima Akef, Ahmed Ramzy and Rushdy Abaza.

Help us improve this page:   Correct or update the Fayza Ahmed page