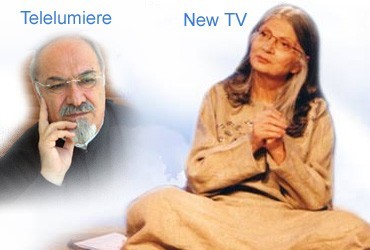 An undeclared war has recently re-erupted between these two very knowledgeable and prominent Lebanese personalities and we say thank God!

Finally some excitement on our televisions, with interesting material worthy of our time.

Most programs today either focus on frustrating political news or on boring reality shows. But lately, this vicious cycle has been broken by lively debates and discussions, which characterize this (war of ideas) between the two television channels Telelumiere and New TV, or more specifically between the 2 shows (Al Menbar Al Hor) and (El Insane) hosted respectively by Pere
Rahmeh and Mariam Nour. They are both equally bold, covering topics such as sex, black magic, New Age, occultism, religions, meditation, esoteric transcendence Father Rahmeh categorically denounces the New Age trend being promoted by Mariam Nour in the Middle East. He indirectly accuses her of hijacking Islam and Christianity, and luring viewers into believing that they are being presented scientific proof to back up their original beliefs.

The two protagonists resort to different techniques to carry forward their points of views and ideas. While Mariam Nour takes to the Shocking system principle and works on destabilizing the listeners in order for them to adhere more easily to her thoughts, Rahmeh on the other hand bases his discussions on an elaborated expos with historical facts and sourced readings.

How long will this go on, and who will get the last say? Let's just hope it lasts long enough.

Make sure you follow this interesting phenomenon. Pere Rahmeh is on every Friday around 20.40 on Tele Lumiere / Nour Sat. Mariam Nour is broadcasted on New TV every Tuesday and Thursday mornings at 9.00 o'clock.