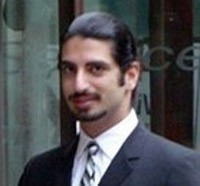 Fahid Hariri has three brothers, Bahaa Hariri, Saad Hariri, and Ayman Hariri, and one sister Hind Hariri. His mother is Nazek El Hariri. All of his family are billionaires.

Fahd Hariri currently is sitting on board of Future Television Network, a terrestrial and satellite Television network, founded by his father Rafic El Hariri back in the year 1992.

Help us improve this page:   Correct or update the Fahd Hariri page