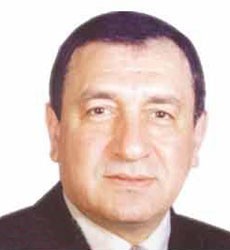 Essam Sharaf is an Egyptian politician, and the current Prime Minister.

Essam Sharaf (Issam Sharaf)was appointed as the country’s new prime minister in March 2011, after Ahmed Shafiq's resignation. Previously he was Minister of Transportation from 2004 to 2005.

His full name is Essam Abdel-Aziz Sharaf. He was born in 1952 in Giza and earned a degree in engineering from Cairo University in 1975. Sharaf worked for a short while as an assistant lecturer in the university before heading to Indiana in the US, where he studied at Purdue University and earned his Masters degree and a PhD in transport engineering. Essam Sharaf holds two engineering degrees from Purdue University. He came to the West Lafayette school in 1978, earning master's and doctoral degrees. He did post-doctoral work in highway infrastructure management. Sharaf returned in 2006 to receive the Distinguished Engineering Alumni award. Sharaf returned to Egypt where he resumed work as an assistant professor of Highway and Traffic Engineering in his alma mater. He also worked for 20 years as a consultant on traffic engineering for the UAE.


In 2004, Sharaf was appointed minister of transport, but resigned his post in 2006 due to the corruption he witnessed inside the ministry. In 2007, Sharaf, along with his friends Zuwil and Baz, established the Science Era Association.


Sharaf is against normalization with Israel (occupied Palestine).

Essam Sharaf supported the revolution that led to the downfall of Hosni Mubarak, and was popular among the young revolutionaries. When the January 25 Youth Coalition held a meeting with the Supreme Council of the Armed Forces, Sharaf was nominated for the position. along with Ahmed Zuweil, Nobel Prize Winner and world renowned scientist, Farouk El Baz, former prime minister Kamal El Ganzoury and Ahmed Goweily, minister of internal trade and supply.


Help us improve this page:   Correct or update the Essam Sharaf page