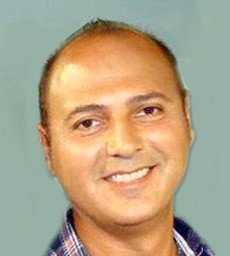 Elie Hawchan is a Lebanese Television host and radio anchor.

Elie Hawchan, also written Elie Hawshan, is one of the presenters of the morning TV show Yawm Jdid which airs on Orange Television - OTV, alongside Mireille Hakim, May Sahab and Pascale Chemaly.

Elie also worked as an MC (or emcee), hosting city and town events such as the Batroun Festival and many other festivals around Lebanon.

To note that Elie Hawchan never received unanimous support from the viewers of OTV, who often find him irritating. So much un-fan groups popped up on the net requesting he be pulled off air such as "We Love Otv but Elie Hawchan Mafi At2al men Dammo".

Gradually people got accustomed to him. He also showed a lot of chemistry with Mike Feghali, with whom he often presents an episode for predictions.

Help us improve this page:   Correct or update the Elie Hawchan page