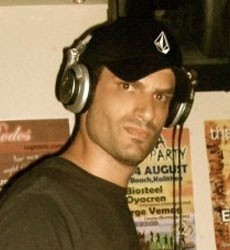 Eiad Sayegh is a Stockholm based Palestinian producer and DJ.

Eiad Sayegh, aka Bambook, is originally from the old city of Nazareth, but moved to live and work in Sweden. He founded The Bambook Project, through which he produces and presents eclectic music, from techno, progressive and tech deep house, all the way to down-tempo breaks and ambient works.. His progressive house tracks, with tribal beats and rich synth stabs have been supported by the likes of John Digweed, John Graham aka Quivver, Henan Cattaneo, Nick Warren, Egostereo to name a few....

Bambook have been known to also collaborate with other producers such as with the Russian Damasko with whom he released M.N.D. (Music Never Dies), featuring vocals from Gill Brown (Arkanna), with syncopated drums, filtered chords and dubby bassline, combined with bouncy melodies and an oriental flavor.

He has also Worked with a variety of artists like Nikos Kargas, Beat Factory, Collins and behnam, Sonic Union and Bastards of Funk, and Andrea Cassino.

Help us improve this page:   Correct or update the Eiad Sayegh Bambook page