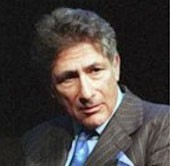 Edward Saïd was born on the 1st of November 1935 in Jerusalem. He died on the 25th of September 2003 was a Palestinian American literary theorist, cultural critic, and an outspoken advocate for Palestinian rights.

Edward Said was a Professor of English and Comparative Literature Columbia University in United States.

Edward Said was the founder of the post-colonial theory.

Edward Said is mostly known for his book Orientalism in which he criticized the false assumptions and perceptions of the West attitudes and culture toward the East.

Help us improve this page:   Correct or update the Edward Said page