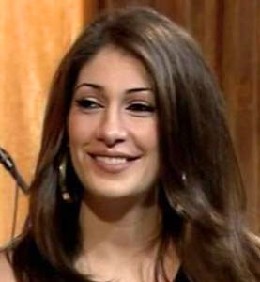 Dima Sadek became famous as a news anchor at Orange Television - OTV, and one of the hosts of the morning political Talk Show on Yawm Jdid. She would sometimes host special shows also on the same TV channel.

Dima Sadek is pretty, smart and very alert on the set...and was an excellent choice for OTV which was newly launched on air back then.

Viewers consider her as one of the best TV presenters in the Arab World, and has a fast growing online fan-base to prove it! Not only is she professional she is also very beautiful in the eyes of many and ranked eleventh on Top 100 Sexiest Arab Women 2010.

Before appearing on television, Dima used to work as an editor for As-safir newspaper.

In 2011, Dima Sadek faced some sort of conflict with the management of OTV, and was seen repeatedly in the studios of Murr Television - MTV Lebanon, a channel with a very large budget. However, she was given a better offer by Lebanese Broadcasting Corporation - LBC, (amidst the fierce competition between the two stations) where she became the co-host of their morning political show on Nharkom Said. Dima's first TV appearance on the station planned for 1st June was however delayed. As per a journalist working for Tony Khalifeh, Marcel Ghanem was reportedly not very thrilled about her arrival, and sarcastically explained that the reason behind the delay was that the lights in the studio did not suit her face and were being improved before she could go on air.

Dima Sadek is now also a news anchor at LBC.

Help us improve this page:   Correct or update the Dima Sadek page