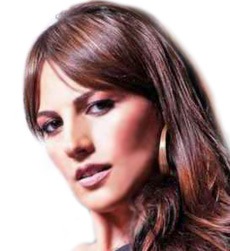 Darine Hamze also known as Darren Hamzeh is a famous Lebanese actress, who started acting in school plays at a young age.

Some audience thought that she of Saudi origin after she participated in "Huamar Sahraa" in which she played the role of a wealthy businesswoman. Others thought she was Iranian after her participation in seven Iranian movies. Other people thought that she had some French roots, after her participation in a french speaking film. The diversity in her personality and roles, made her famous and mysterious at the same time. The truth is that she is of Lebanese origin and identity. She lived most of her childhood in England, during the war, and moved back to Lebanon in the early nineties. Darine Hamze studied acting and directing at the Institute of Fine Arts at the Lebanese University. She participated in "Talbeen El Orb" a famous Lebanese television drama by Marwan Najjar. She also played some of Karim Dakroub theatrical plays before graduating from the Institute of Fine Arts in 2001. She worked at Future TV, then moved back to Britain, where she earned a postgraduate diploma in acting and directing from the University of Westminster.

In 2011, Darine played some bold scenes in the Lebanese movie "Beirut Hotel" a movie by Lebanese director Danielle Arbid. Her role tells the story of "Zaha", a Lebanese singer who sings in a hotel and is trying to run away from her ex-husband who cheated on her. Zaha meets Matthew, a French lawyer, who works as a spy, soon a love story filled with fear and desire, conspiracy and violence starts between the couple. Her remarkable performance, with scenes of love exposed her to much criticism, ruling out her appearance in the second part of the "Al Ghaliboun - The Victors" where she embodies the ideal figure veiled girl who gives lessons in religion.

Beirut Hotel has been banned from Lebanon because it mentioned the assassination of ex-Prime Minister Rafik Hariri in one of the dialogues. The movie had originally been scheduled for release on the 19th of January 2012, however the release got cancelled. The Lebanese censorship committee said that the movie would put Lebanon's security in danger. This information was mentioned in the The Daily Star.

Help us improve this page:   Correct or update the Darine Hamze page