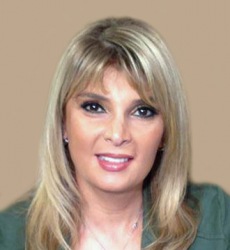 Passionate, creative and serious Media figure with a strong TV image and a deep belief in the role of professional journalism.

Dalia Dagher is also known for her Radio Show "Min Alb Beirut - From the heart of Beirut", the show plays on Sawt El Mada Radio.

Dalia Dagher is known to present the TV program "Ala Stouh Beirut - From the Roofs of Beirut".

Help us improve this page:   Correct or update the Dalia Dagher page