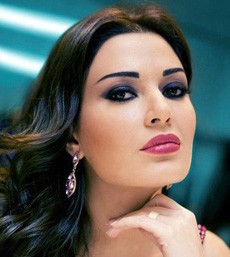 Cyrine Abdel Nour is a Lebanese actress, model and singer.

Cyrine Abdelnour, sometimes written Cyreen Abdul nour or even Cirine, was born on the 21st of February, 1977. She is the younger sister of former model Sabine Nahas.

She is one of those Lebanese models turned singers that took over the music industry for a while, after Haifa Wehbe paved the way. However, unlike most of them, Cyrine possessed slightly better vocal skills in addition to her physical beauty. She ranked seventh in Top 100 Sexiest Arab Women 2010.

In 2002 Cyrine was elected model of the world, in a pageant that was held at Regency Palace Hotel in Lebanon.

Cyrine's first music album was entitled, Leila Min El Layli which was released in the year 2004. Cyrine launched her second album Aalik Ayouni with Rotana. The single Law Bass Fi Ayni Mara Bass became one of the most popular and widely listened to songs in the year 2006. She followed it up with a second hit single from the same album, Aalik Ayouni.In December 2008, Cyrine released her third album Layali el Hob.

Cyrine has also appeared on the big screen, next to the international Egyptian actor Omar El-Sharif, in The Traveller.

Help us improve this page:   Correct or update the Cyrine Abdelnour page