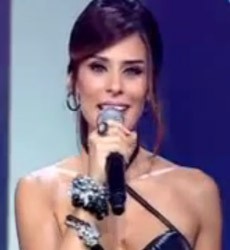 Charlotte Semaan is a Lebanese model and TV presenter.

In 2011, Charlotte became the host of the TV show Ghani Ma3 Ghassan, alongside Ghassan Rahbani on Al Jadeed TV.

Help us improve this page:   Correct or update the Charlotte Semaan page