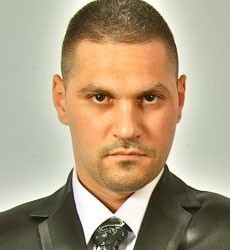 Charlie Shaabi (aka Dj Chuck) is a DJ Producer from Palestine, and one half of the group Electrowavez.

Charlie Shaabi was born on August 09, 1976 in Acre Palestine, where he grew up. At the age of 17, he went on to study and train in mixing music.

After composing music and DJ’ing as an amateur, he decided to seriously study all aspects of Music, Sound Recording and Production. He worked for big events and parties, before traveling to the U.S.A where he composed Hip-Hop beats for various rap bands and artists. DJ Chuck also promoted these bands in many countries including London, France and Italy (Rock No War), in Sweden (Poetry Festival), as well as items in Germany, the USA and many other countries around the world. He also manages the all- girl rappers group (Arapiat).

Dj Chuck's remix of Salmon Dance, a track by the Chemical Brothers, was also one of the best in a competition launched by the international group.

Charlie Shaabi is becoming increasingly popular and sought after both as a performer and producer, all because of his unique blend of melodies and beats that he creates.

In 2008, he formed the Arabic oriental electro group ElectrowaveZ, along with Richard Savo.

Angelina Zbedat's vocals are often featured on their tracks.