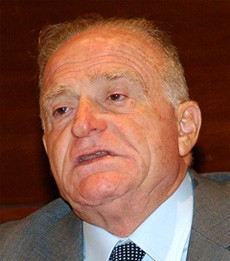 Charles Rizk is a Lebanese politician who was born in the year 1935 in Beirut.

After studying at the Institut d'Etudes Politiques de Paris, he started his political career by assisting Lebanese President Fouad Chehab.

Charles Rizk was the head of the National Information Agency.

In July 2005, The Lebanese Prime Minister at that time, Fouad Siniora appointed Charles Rizk as the Justice minister, a position which was to be held by Michel Aoun and Saad Hariri.

Appointing Charles Risk caused a lot of controversy, as he was considered to the side of Emile Lahoud, the general public was under the impression that the investigation regarding the Assassination of Rafik Hariri will not progress easily by a pro-Emile Lahoud minister.

On the contrary, Charles Rizk supported the international investigation which was led by Serge Brammertz.

Help us improve this page:   Correct or update the Charles Rizk page