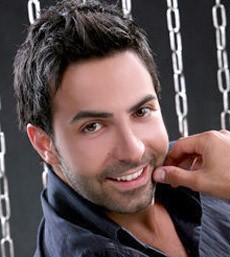 Carlos Azar is a Lebanese Actor, TV presenter and a promising singer.

Carlos Azar is the son of the famous Lebanese singer Joseph Azar.

Carlos has also participated in many theatrical plays, including his most successful work 3al Tarik, with the Lebanese comedian Georges Khabbaz.

In 2008, he won the Murex D'or award for best Lebanese actor.

Help us improve this page:   Correct or update the Carlos Azar page