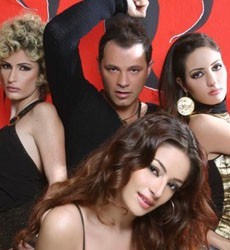 Carisma was a short-lived Lebanese band made out of one male member Dimitri Haddad,surrounded by mostly hot and sexy girl dancers slash singers.

Do you ever wonder why a new singer or band pops up here and there every few days, or what really goes on “behind the scene” in the entertainment world?

Here is your chance to get a quick peek into this smoky environment.

The best place to look for answers would be in a collapsing or struggling band, where the members are willing to shortly put to rest their poker faces and answer our direct “unpolished” questions with total honesty (or close enough at least). That’s just what we did. Of course they resist at first!

However, this does not last very long usually, because of the emotional and psychological relief they attain with each additional answer they provide us with. Carisma? Carisma who!? Did they ever actually make it? We are not sure they have ever been a success story, but they have been involved in the music industry and have had sufficient contact with “the scene” to accurately describe it. We had an honest chat with Camella Kiwan, ex-member of Carisma, and here are a few highlights of our interesting interview.

Camella received us in her small rented room, early in the morning; “Sobhiyeh” style.
The whole meeting was very casual and unprepared. It was obvious from the scarce questions scattered on our paper the night before, and even more flagrant from the mess that flooded Camella’s room :) We did surprise her with our early arrival though, so we forgive her. She welcomed us with a smile and a very fresh and bright face for someone who had just woken up!

After hot coffee was served, we started with the serious stuff. Actually, there was nothing really serious about the whole thing. Camella turned out to be a confident, funny and spontaneous girl, which made our job easier.
She didn’t want to talk much about Carisma, because as she puts it, it’s part of her past now and she has other plans for the future. But we insisted. After all, we were there primarily for gossip, and gossip we were determined to get ;)

So as not to make this article too long we will not go into details about the group and its formation. But in brief, the band had already been struggling to keep its members, when Camella joined. Dimitri, head of the team, replaced the 2 other vacant seats with Rima and Pascale. Beauty was a crucial criterion in the selection of course!

We directly confronted her with the mediocrity of the band’s achievements, in order to check her reaction. She couldn’t really argue, since it was a fact after all. She did however highlight the events and shows they participated in, incidentally 4 Lebanese “mahrajenet” and more shows in Jordan and Syria, where most of their activities were concentrated. Why? We
didn’t really grasp her concealed and vague answer, coupled with a peculiar laughter.
Why did it seem as if the band had been in an ongoing struggle ever since it was first launched, we asked her. Was it bad management? The product and services they were providing? The market? Their talent (or lack of)? All of
them together?

She stressed on the lack of financial support they received. Rotana took charge of distribution but not of production, which is the most determinant and costly factor in a successful music career.Why did she get involved in all this to begin with?
“Just for fun at first…but mostly to satisfy my ego and gain fame…and ultimately money… that’s why they all do it!”
We continued: Good and easy money?

She laughed and reminded us of her current humble room.

“Is there good money in it you ask? It was supposed to be that way…this is why everyone wants to do it, but for me this wasn’t the case. My income came solely from the shows and events we did, not from CD sales and all that… so we had to work hard and perform regularly and very frequently to make an average living, which was rarely the case. Anyway, that’s in the contract I
signed. Even now, if I record a new song or album, I cannot benefit from the proceeds. I still have to wait for 6 more months before the contract expires. This is why I haven’t done anything yet…but I am working on it. I might go solo, or even consider acting. I might even emigrate! Who knows. ”

Now comes the question we came over to ask in the first place. Why did the band break apart? Why did you leave?

“What I learned from this experience is that …like in every other business, in entertainment you have to make money…seek the market’s needs and satisfy them…In order for the group to survive, we had to seriously start considering doing “private parties”. I could not tolerate that. I am cool and outgoing but not to that extent. On top of the services I could not provide or refused to be associated with, came the constant and growing demand to embrace the trend of plastic beauty and improve our physical appearance through plastic surgery… We had a relatively adolescent image. We had to meet the taste of our Arab fans who responded more to voluptuous sexy lines… I mean I have relatively a flat chest compared to other female singers out there…”

We were not very diplomatic with her at that point. We questioned that their looks were most probably what brought in the crowds to their shows in the first place!

She hesitantly added that she was aware that their looks and image are what brought people to see them, but also insisted on their dancing and stage performance.

Frankly we were not that convinced but we played along.

Dancing such as The 4 Cats?

“No they don’t really dance, they just move around that’s all. We really danced! We had daily training from 6pm till the next day sometimes. It was also another reason that helped make up my mind to leave, because it was time consuming and physically tiring”

Back to the services you mentioned earlier…Do you mean to tell us they all do “private parties”?

She had a look on her face that clearly said: Where do you live!!! “They all provide private services… most of them, in order not to say all of them”

We suggested a few names that had a mild and innocent image to question her previous statement, and she also included them in the “black list” to our astonishment.

Because we cannot be sure about the accuracy of the names involved and since it is not our intention to hurt anyone we will not mention the names.

What’s your opinion on the current rush of models in large numbers towards singing? Do you like any of them?
“They don’t mean anything to me, because I know how they are “done”, what they do, how they work and all the image building tricks they play along with… so they have lost their charm and glitter to my eyes. Anyway they are all alike, just after fame and money.”

Final question: From all those who are on “the scene” today, who do you fancy?
“I like Wael….Ryan… and Marwa “mahdoumeh” kamen…..”

We would like to wish Camella good luck in her future plans.

It was also interesting to note that although Camella seemed fed up with Dimitri, and despite her friend's continuous pressure (a friend who had introduced us to her and who accompanied us there) to talk about him and the sort of things he does "Fdahi, ey fdahi", she respected their previous friendship and did not go on. We didn't pressure her either for we knew it was something most probably related to his personal private life and not that hard to figure out anyway...

Help us improve this page:   Correct or update the Carisma page