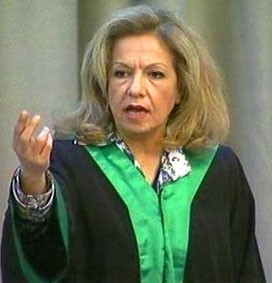 In the year 1985 Bushra Khalil practiced law in Belgium. She was often a guest of the Iraqi authorities in the 1990s.

Lebanese lawyer Bouchra Khalil became Saddam Hussein member of the committee who defended the former Iraqi president during his trial.

Boushra Khalil is one of the few women, who wished to defend the overthrown dictator on his trial.

Despite her relations with Shiite leaders (her uncle, Sheikh Mohammed Taqi al-Faqih, was a student of Iraqi Shiite figure Sheikh Mohsen al-Hakeem) Boushra had also been in contact with Sunnite leaders of the collapsed regime. The Lebanese lawyer was even friends with Saddam's son Ouday.

Help us improve this page:   Correct or update the Bushra Khalil page