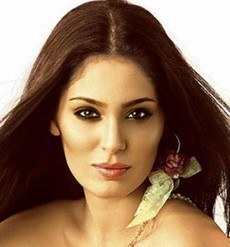 She is famous being tall, having long legs and a hot Spanish Accent. She got raised in Brazil and uses the screen name Bruna Abdullah since its more relevant to her Muslim fans who live in Dubai, Pakistan and India.

She really does not practice Islam anymore but since she is around all the famous Khan celebrity, she might become more Islamic in a way or another.

She recently stopped rumors of her being related to Salman Khan.

Help us improve this page:   Correct or update the Bruna Abdullah page