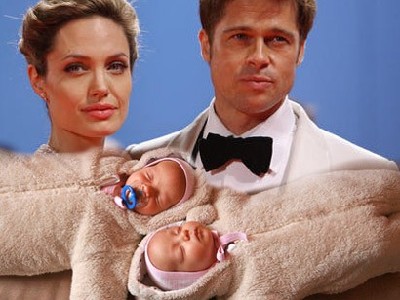 Hollywood actress Angelina Jolie and golden actor Brad Pitt are the proud parents of twins, they named their boy Knox Leon and a their girl Vivienne Marcheline.

Angelina Jolie gave birth to her baby twins at the age of 33 on Saturday evening 12 July 2008, at a maternity clinic in Nice on the French Riviera.

Angelina Jolie went through a half-hour caesarean operation to give birth to her children, the first photos of the babies have been sold for $15 million.

The golden couple are both happy with their newly born twins.

Help us improve this page:   Correct or update the Brad Pitt and Angelina Jolie parents of twins page