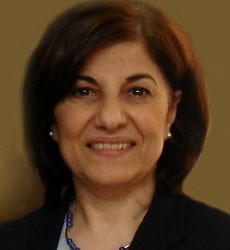 Bouthaina Shaaban is a Syrian Politician and the current political and media adviser to the President of Syria Bashar al Assad.

Bouthaina Shaaban joined the Baath party since she was 16, and is considered in a way 'the face' of the Syrian Regime. In light of the Syria Protests of 2011, Buthaina Shaaban was the one to announce the reforms in the hopes of containing the situation.

Bouthaina Shaaban was born in Homs , Syria , in 1953. She is married with two daughters and a son.

Bouthaina Shaaban received a Ph.D. in English Literature at Warwick University England in 1982.


Before becoming in 2008 the Media Adviser at the Presidency, she was the Minister of Expatriates from 2003 till 2008.

Bouthaina Shaaban was nominated in 2005 for the “1000 Women for Noble Peace Prize”, and “ The Most Distinguished Woman in Governmental Position”, league of Arab States , Cairo , Egypt , April 27th 2005.


Bouthaina Shaaban also has many publications including Arab Women: In the Twentieth Century, (In Arabic), Dar Al-Mada in Damascus, Syria (2000) , A Hundred Years of Arab Women Novelists, (In Arabic) , Dar Al-Arab in Beirut , Lebanon (1999), Poetry and Politics: Shelly and the Chartist Poets, (In Arabic), Dar Tlas in Damascus , Syria (1993), Both Right and Left Handed: Arab Women Talk About Their Lives in English, The Women’s Press, London, 1988 and Indiana University Press, 1991.


Help us improve this page:   Correct or update the Bouthaina Shaaban page