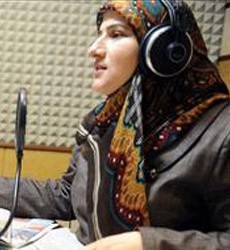 Bouthaina Oleik is a Lebanese journalist and radio anchor.

Bouthaina Oleik (aka Bouthaina Allaik or Buthaina Alleik) presents a daily news show on Nour Radio, a pro-resistance station that complements Al Manar Television. With her exhaustive in depth daily roundup of all the political news in the press followed by an interview with a chosen figure (politicians or other journalists), Bouthaina has become one of the most listened to radio presenters in Lebanon and the Levant region with "Al Siyassa Liom" (Politics Today). Once a week, Oleik also focuses on the international press.

Bouthaina Oleik originally worked for Al Intikad newspaper (Critic Daily) in political opinion analysis, and in 2000 was casted for both Manar and Nour and got accepted. She however chose a career in radio, which was more appealing to her. She began as a news reporter until the «July Aggression» when the morning show turned political, and she began doing political talk shows.

Bouthaina Alleik recently received another invitation from Al Manar to present their morning show, but she is yet to make up her mind.

Help us improve this page:   Correct or update the Bouthaina Oleik page