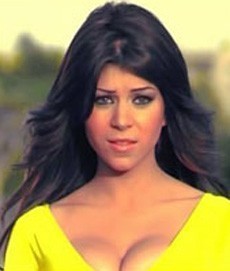 Booby Julia sometimes misspelled Bobby Julia is a model and a belly dancer from Egypt.

Booby Julia is mostly known for being the woman model who appears in most of the melody TV Ads and promos.

The concept initially showed Booby Julia all dressed up in a sexy yellow super heroine costume, which was highly regarded as funny and cute. However the concept changed and she started appearing in the Ads differently.

In one of the ads, Booby is involved in a funny cat-fight with Lebanese singer Dana Halabi. The obnoxious Dana (from Booby's point of view that is) is sitting in a car next to a male driver, and is enumerating all her hit songs, which all happen to have her name in them. The super heroine Booby, who fights boredom and mediocrity in the music industry, rushes to the rescue! They slap each other around before Mr. Melody Man interferes to break them off, not without getting hit himself!

In the latest funny promos of Melody, it seems as if they are attempting to cast a new model to play Booby, to the dismay of Julia! The costumes have also taken a blow and are far more conservative now. We hope she won't get replaced, given she fits her role so beautifully. After all, it is no secret where they got the name Booby Julia from. Booby's voluptuous bust is a definite trademark!

Help us improve this page:   Correct or update the Booby Julia page