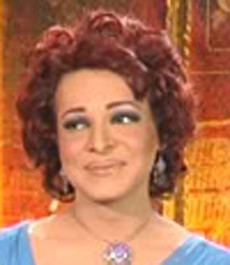 Begum Nawazish Ali, is a Pakistani TV host, actor comedian and impressionist. His real name is Ali Saleem, a bisexual man who was born to a retired colonel father in Pakistan Army.

He later created and played the cross-dressing drag Begum Nawazish Ali on many TV channels, such as the Aaj TV network and Geo Television network.

Help us improve this page:   Correct or update the Begum Nawazish Ali page