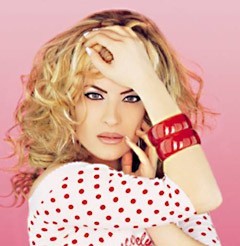 Bassima is a Lebanese singer known for her unique and elegant style in singing, she is also known as Basima, Bassima was a Studio El Fan winner. She is one of the most important female artists in the Arab world today. Bassima has released more than six albums cooperating with the most important names in the Arabic music industry like Samir Sfeir, Marwan Khoury, Tarik Madkoor, Boudi Naoum, and others. Bassima has an exceptional style of singing. In her music you can feel the pure oriental tunes mixed with an attractive trendy music to formulate breath-taking hits like Aini Yamo and Andi Soual.

Bassima has reached high standards in her Musical career and she has a large base of audience of different age groups and genders. Her fans are always eager to listen her lastest songs.


Bassima started her career with some famous songs like Washwashny Habibi Sammaani Kalam - Whisper To Me and Fee Orbak we Boedak Hayati Ashanak. Bassima worked closely with famous Lebanese singer and composer Marwan Khoury, who started writing and composing songs at the time of her first album Dawwabni Doub. The album featured a duet between Bassima and Marwan called Kasaak Habibi. The lead song and album title became a huge hit in 1999 and is considered as Bassima's Debut. Bassima then signed with prominent record label company Rotana. Bassima continued working with Marwan Khoury in her second album Andi Soual (I Have a Question!), and third album Einy Ya Mo.

Bassima gave birth and she was away from the scene for sometime. Marwan Khoury wanted to give the song Etalla Feyyi to Bassima but because she was away for maternity, he felt that the song was being ignored, so he gave it Carole Samaha and it achieved a huge success when Carole filmed it with prominent Lebanese director Nadine Labaki.

Bassima was deeply disappointed and upset and cooperation stopped between the two since then. However Bassima still compliments Marwan's works and says she could still work with him again.

In 2004 Bassima third album entitled, Shou Rajjaak (Why Are You Back) came to life, she was put back in the spotlight after her maternal period of absence.

Another important mark in Bassima's music career was her cooperation with prominent Lebanese composer Samir Sfeir. They met by coincidence, and Sfeir, who was impressed by Bassima's vocal abilities started working with her on her next album. In 2005, Bassima's fifth album Shoo 3a Bali (I Long For..) achieved a huge success. With six songs, four by Sfeir, the album sold greatly. Shou Abali was a smash hit that was played on all local and Arab radio stations.