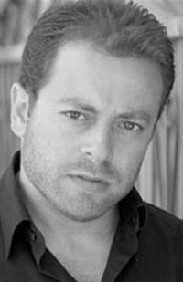 Badih Abou Chakra is a famous Lebanese actor who has worked in both lebanese movies and television drama, theatre productions in both Lebanon and France.

In the year 2002, Badih Abou Chakra won the Murex D'or award for the best actor in Lebanon.


Badih Abou Chakra graduated in the year 1998 from the Lebanese University in Beirut with a BA Honours in acting.

Badih started his career in acting by attending acting workshops in Lebanon and France. He also took other workshops in Tunisia, Jordan, Boston USA (Sanford Meisner Acting Technique), and the Equity Showcase in Canada with David Smukler.

Badih has played a leading role in the History Channel’s Zero Hour and participated as an off-camera actor in the CBC’s Little Mosque on the Prairie.

Badih also hosted of a famous talk-show on Orbit TV.

In addition to acting, Badih is also an editor, he published two books and designed sets for several plays.

Help us improve this page:   Correct or update the Badih Abou Chakra page