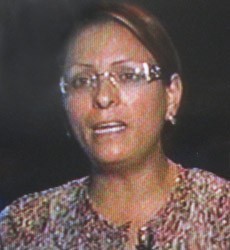 Assya El-Haj Salem is a Tunisian Lawyer and political activist, the first Tunisian opposition figure to be tried for her views and statements after the Revolution of Tunisia.

Assya El-Haj Salem (aka Assia or Asya Al Hage Salem) is in the Tunisian opposition, and took part in the Tunisia Protests. She was already known before the January 14 Revolution as the defense lawyer of "prisoners of conscience" in Tunisia and had fought with other Tunisian activists in the field of human rights and public freedoms. She is also the leading member of the newly created movement 'Al-Wataniyin Al-Dikratiyin' (a party licensed after the revolution).

Assya El-Haj Salem was member of the Tunisian Reform Commission Forum for the Higher Goals of the Revolution which she strongly denounced before leaving it. In May 2011, Haj Salem raised controversy in Tunisia when she was the very first to announce her resignation from this authority, supposedly established to achieve the goals of the revolution, and which was formed by the Government of Beji Caid el Sebsi, describing the body's intentions as 'not to achieve the goals of the revolution, but to achieve the objectives of the government' and calling all Tunisians to boycott el Sebsi's government.

Assya El-Haj Salem said she was mostly shocked by the existence of so many elements known to be loyal to Ben Ali in the past in this reform body. She resigned after el Sebsi refused to pass through Article 15 which prohibits previous dissolved ruling party symbols from standing as candidates in the new elections.

Following her withdrawal she took part in a protest at the Palace of Justice next to the Syndicate of Judges, which was formed after the revolution of January 14. She accused the judges loyal to the former regime of using their judiciary position for revenge, and said they were partners in the suppression of citizens.

Following her statements, she was charged for 'libel', 'making a commotion and confusion', 'impeding the course of justice' and 'assaulting the prosecutor'. Assya described her trial as an honor, and did not attend the first 2 meetings (6-7 July), but then appeared before a prosecutor on July 11 insisting on her right to express her opinion, amid widespread support from fellow lawyers.

In an interview with Al Quds Al Arabi, Assya El-Haj Salem explained that the revolution of Tunisia was "stolen by the remains of Ben Ali regime and some careerists who are solely interested in seats", adding that "trying me for my views and for defending the right of our people in holding accountable those involved in the looting of our resources and restricting our freedoms, and repressing us for more than two decades, is evidence that the revolution has not yet completed its path nor has it achieved its objectives".

She criticized once more the 'Commission for the Achievement of the Objectives of the Revolution', saying that it was only interested in the superficial technical aspects, always avoiding discussing the real objectives of the revolution of Tunisia. She added they failed to address the issue of charging former agents involved with the Ben Ali regime, some of who are part of the forum itself, and removing them from their official positions.

Help us improve this page:   Correct or update the Assya El-Haj Salem page