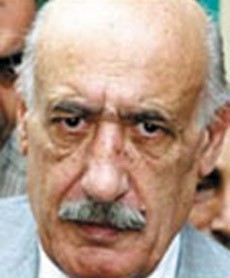 Assem Qanso is a Lebanese politician and the Lebanese Leader of the Baath party, which he joined in 1953.

Assem Qanso was born in the year 1937 in Baalbek, Lebanon.

One group was pro Iraq and the other was pro Syria. Qanso was within the pro-Syrian part of the Baath organization.

In the year 2000, Assem Qanso publicly supported the extension of the Émile Lahoud and threatened Walid Jumblat.

Assem Qanso holds an engineering degree from the Croatian University of Zagreb (mine and geology) and later got a degree in Petroleum and Geology in Romania.

It is worth noting that one should not be confuse Assem Qanso with Ali Qanso, another Lebanese politician and the head of the SSNP.

Help us improve this page:   Correct or update the Assem Qanso page