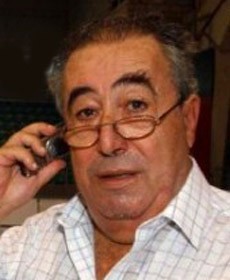 Antoine Choueiri was a businessman and a media tycoon.

Antoine Choueiri started working in the media and advertising since the year 1972.

Antoine was the leading media agent in advertising for many Arab media outlets such as An-Nahar and As-Safir Lebanese newspapers.

In Television and Satellite, He was one of the main sources of advertising for the Lebanese Broadcasting Corporation - LBC International TV, Al-Jazeera and more.

Antoine Choueiri tried to play an important role when a dispute happened between Pierre El Daher and Lebanese forces leader Samir Geagea over the ownership of LBC. As a result Daher asked Choueiri to leave LBC as he felt that he was favoring Samir more.

In the early month of February 2010, he was admited to Hotel Dieu Hospital in Ashrafieh after suffering from Pneumonia.

Antoine Choueiri died on Tuesday, the 9th of March 2010.

Help us improve this page:   Correct or update the Antoine Choueiri page