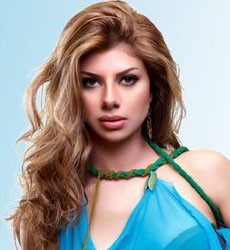 Amira Fathy is an Egyptian model, actress, and singer.

Amira Fathy, also written Amira Fathi, originally studied Tourism & Hotel Management. However, she first began a career as a model, and starred next to Arab singers in their music video clips, such as next to sha'by Egyptian folk singer Hakim in Afrod.

Amira Fathy later got noticed by comedian Samir Ghanem and included her in the cast of his theatrical play "Bahloul in Istanbul".

Amira Fathy has appeared mostly in popular low budget Egyptian comedy cinema, in movies like Sa3idi fi el Gam3a el amirikia (A Saidi in the American University), Ferkat Banat wbass (all girls band only), Lawkan Da Helm (If this were a dream), Pizza Pizza, Bahibak wabamout fik (I love you and would die for you), and many others.


In 2011, Amira Fathy decided to turn into a singer and launched her first single Oubal Kol elBanat on Melody Hits TV.

Help us improve this page:   Correct or update the Amira Fathy page