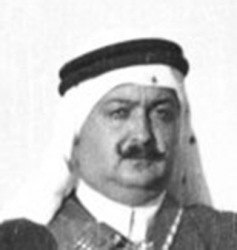 Amir Majid Arslan was born in February 1908 in Lebanon and he died on the 18th of September 1983.

His father was L’Emir Toufic Arslan who was one of the founders of Greater Lebanon in the year 1920.

In the year 1956, Majid Arslan remarried after the sudden death of his first wife, He married Set Khawla Jumblatt. From his second marriage he had 3 daughters Zeina Arslan, Rima Arslan and Najwa Arslan and a son, Talal Arslan a famous Lebanese politician.

Help us improve this page:   Correct or update the Amir Majid Arslan page