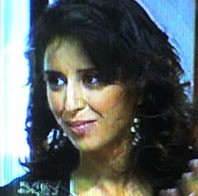 Amina Ben Jemaa is a Tunisian blogger and internet activist.

Amina Ben Jemaa was one of the social media activists in Tunisia that sought the fall of Zine El Abidine Ben Ali's regime in January 2011. She later joined the media team of prime mister Mohamed Ghannouchi who assumed power from Ben Ali up until he resigned. Al Ghannouchi had a communication problem and needed an insider to give him sincere feedback of what people were saying among internet activists.

Help us improve this page:   Correct or update the Amina Ben Jemaa page