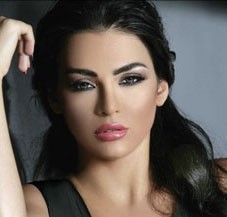 Amar, like her name suggests (moon in Arabic), is a beautiful pop singer from Lebanon.

Amar joined the trend of “pretty girls can sing too” relatively late. Although the market was highly saturated, Amar managed to find herself a small niche, thanks to her smart strategy.

Amar is definitely one of the most photogenic and telegenic Arab Artistes. This is how our editor sums it up:
What happens when you mix 2 tablespoons of Hayfa Wehbeh, one cup of Nancy Ajram, a few drops of Elissa and a sprinkle of Nana ? Well you get the hottest female celebrity for 2008, winner of the "Hal Sissane, ttsss ttsss Award", the beautiful sugar coated Amar. She also ranked 15th in Top 100 Sexiest Arab Women 2010.

Unfortunately, Amar is still hanging on to her initial strategy of doing whatever is currently in vogue!
The album launch campaign was highly inspired by that of another Lebanese artist Yasmine Hamdan. The intergalactic space shuttle on a mission in the large universe highly resembles Yasmine’s album campaign for Arabology. In the video for Get It Right and the trailer for Yaspop, Yasmine is an astronaut on her way to the moon!

Amar's GIGANTIC Marsian-like billboards plastered all across Beirut and its peripheries also won her the funny title Mars Attacks 2010, given to her by the Banadoura d’Or Awards.

Below is the very first article we posted about Amar:

Amar is a lebanese singer who looks like haifa wehbeh.

Just when we thought we had seen the last of these new comers to the 'artistic' scene, a new music sensation appears.

Haifa, or Amar Rotana like she is sometimes called, now has to face a tough and much younger rival that goes by the similar name of Amar. This new contender does not only bear a comparable name but surprisingly sings in the same professional manner. She utters the lyrics and notes just the way Haifa does, with a blurred pronunciation, and a sensual attitude escorted by expressive sighs here and there. One has to understand that all this is merely a sign of the high level of creative maturity involved in such productions, necessary for the successful delivery of the artistic message or 'el rissala al faniya'. Similarly, one cannot help but praise Amar on her imitation skills and her mastery in identity theft. Perhaps Fayrouz was a role model in the past, but Haifa has obviously become the latest archetype of success and excellence in the entertainment and music industry.

Amar did not just count on her grand vocal abilities and notable physical resemblance to Haifa (she might even be prettier) for her first appearance. No, she was also fortunate enough to work on her latest release 'Naro Btehri'ny' with video director Mirna Khayat, also known for her originality!

As usual, Mirna blows us away with her clever and unique story board ;) When will the mass production cease Mirna? But at least she knows how to make female singers look beautiful, to satisfy their aching ego and this is mostly what is needed here.

How long do you suppose Amar will last?

Help us improve this page:   Correct or update the Amar singer page