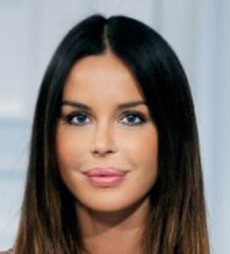 Amanda Fattal is a fictitious Lebanese model, and an online celebrity.

The cunning woman, who pretends to be based in Spain, often uses fake photos of other models to lure in more friends and admirers to her facebook account. She also has her photos displayed on many Arabic websites such as Sexy Lebanese Girls . In the current photo on display, she posed as Croatian model Nina Moric.

We were very impressed with her and were very pleased when she accepted to enter the Sexiest Arab Women 2010 list. Unfortunately, we had no idea that the model was not real in time and she made it to the list. We later kept her profile as a virtual celebrity, since if Amanda Fattal is not considered as sexy (sexy like a FOX that is!), then no other woman can claim the title! Given we were in the age of cyberspace, and our survey was also virtual we felt it was only natural to have an online virtual celebrity on board of this study. If we do this next year, we might also include the 3D animation virtual humanoid celebrity Yaya Yay!

For other online celebrities, check Abdulaziz Kassar and Ahmed Zabedy.

Help us improve this page:   Correct or update the Amanda Fattal page