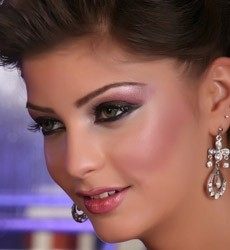 Alice Tawil will be competing this year with 16 other beautiful Lebanese women in a competition which will be for the first time under the complete control of the Ministry of Tourism! Supposedly there won't be any cheating this time around.

Alice Tawil is already being called the new Miss, but let's wait to see the rest of the Pageant.

Help us improve this page:   Correct or update the Alice Tawil page