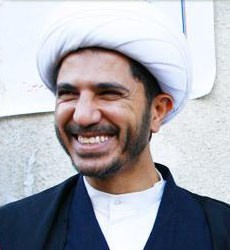 Ali Salman is a political activist from Bahrain, and the president of Al-Wefaq party.

Also known as the Islamic National Accord Association, Al Wefaq is the largest party in Bahrain.

Ali Salman led many popular campaigns for reform, such as the 1990s Uprising, and was forced into exile. He went to Dubai in 1995 before later seeking political asylum in London. From there, he continued his opposition activities, before returning to Bahrain in March 2001 as part of a set of agreements with by King Hamad.

Ali Salman is a Shi'a cleric who pursued his education in Qom. He is considered the 'moderate' public face of the Wefaq organization.

Ali Salman was one on the main opposition leaders that supported the Bahrain Protests of 2011. After the dangerous escalations that witnessed the arrival of GCC forces on Bahraini territory on Monday 14th March, Salman strongly condemned the move and qualified the troops as occupation forces. He declared the protests would persist despite all these attempt, highlighting their passive and peaceful nature.

Help us improve this page:   Correct or update the Ali Salman page