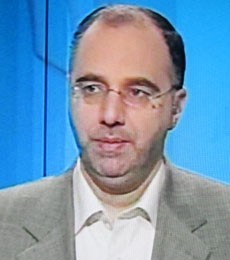 Ali Al-Mesmar, aka Ali el Mismar, is a news anchor on Al Manar TV (Satellite Channel). This Television presenter is known for his distinctive voice. Ali has read news for many years and reported live events on numerous occasions.

His presence on Television is highly watched and his charismatic personality makes him one of the best Television news anchors.

In 2006, Ali Mismar won the best local anchor award. He was among other Television personalities from Al-Manar who won awards during the fourth Arab Festival for media outlets which was held in Beirut in April 2006. More than forty media outlets were present at the event.

During the event, Al-Manar television won four other awards: Uncle Waddah as the best program for children, best sports program was given to Ali Fawaz. Mustapha Noureddine won an award for the best advertisement and Ruhollah by Ayman Zogheib won the best documentary award.

Help us improve this page:   Correct or update the Ali Al Mesmar page