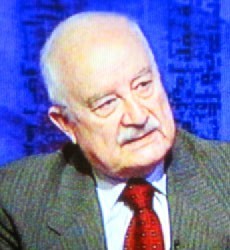 Albert Mansour is a Lebanese politician, and geo-political analyst.

He believes there is no such thing as Arab Spring (Arab Revolutions) , rather mere regional 'staff' change by the American Administration and the creation of week conflicting entities surrounding the state of Israel (occupied Palestine). The Israeli-Arab conflict is being replaced with an Iran (Persian)-Arab and Sunnite-Shiite conflict.

Albert Mansour was originally elected Greek-Catholic MP for Baalbek-Hermel in 1972. He was later appointed as Minister of Defense (1989-1990) in Salim El-Hoss' government (first term of Elias Hrawi) after taking part in negotiations of the Taif Agreement in Saudi Arabia.

Albert Mansour was also Minister of Information in the government of Omar Karami between 1990-1992.

After failing in the legislative elections of 1992 and denouncing the irregularities of the elections and the disregard for the spirit of Taif, he published a book called 'Putsch against the Taif', about the perversion of this agreement.


Albert Mansour was known for being critical of both Rafic Hariri and the Syrians in Lebanon, while remaining a close ally to O. Karami. In 2004, he formed with Karami, Salim El-Hoss, Boutros Harb, Nayla Moawad and Hussein Husseini, the National Front for Reform, a short lived political group that was disbanded not long after.

Help us improve this page:   Correct or update the Albert Mansour page