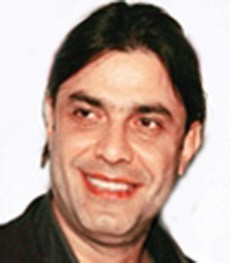 Alain Makdessi is a famous Guitarist who works mostly with Ghassan El Rahbani. He is known for his special chemistry with Ghassan when performing on stage.

Alain Makdessi has long haired which makes him look like a typical rock--n-roll guitar figure.

Alain Makdessi plays the Electric Guitar, his special Electric guitar performance of Amr Diab Matkhafish Remix made it to one of the tracks of the Rewind Amr Diab Album produced by EMI Music Arabia in 2002.

In 2009, Alain Makdessi got married to Cynthia Massaad.

Help us improve this page:   Correct or update the Alain Makdessi page