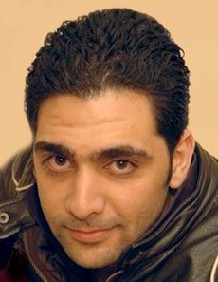 Akmal Raslan is an Egyptian singer who released his debut album in 2009, he is mostly known by the name of Akmal. He goes by his first name only, so it would be hard to find him unless you know his family name "Raslan".

Akmal first album was entitled "Lessa Ader" in 2009 and it was produced by Sound of Delta music records. Two years later, he released a second Album entitled "Mosh Laeb" which means "I am not playing", the album was produced by Melody Music. The album included eleven songs most of which are dance melodies. Almost all the songs are very easy to fall in love with. Tunes which enter close to your heart and get stuck in your mind.

Some of the tunes might remind you of your favorite songs, but its difficult to figure out which ones. The album was released by "Solo records" which is affiliated with melody music productions.

Akmal voice is nice and comforting, it is very easy to fall in love with him especially when he sings love songs such as "Kol Elli Farek" which means "All that matters" and the song "Taabi Khalas" (My pain is over). Within few years, this artist has made a good name for himself in the music scene and we predict a very bright future for him.

Help us improve this page:   Correct or update the Akmal Raslan page